I have a culture! 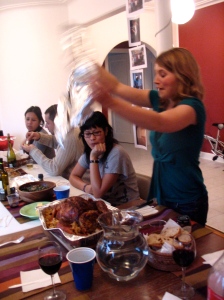 I grew up in an America where it was cool to be ethnic. College was one long succession of cultural appreciation events from Passover to Kwanzaa to the annual luau. Everybody got a chance to share their beautiful traditions and it was great – something to celebrate every week.

I remember in 5th grade when we spent months learning about Ellis Island and how people immigrated to America, bringing their traditions with them. What could be cooler than being a hyphenated American? Two cultures is better than one, no?

The thing is, I’m just plain American. I’m not African-American, Mexican-American, Italian-American or Native American. I figured I was probably descended from all those Ellis Island folks, a European mutt like most of my friends, but while home on vacation, I picked up a copy of my dad’s family history and the myth was shattered. Apparently some distant aunt got a bee in her bonnet about joining the Daughters of the American Revolution and she’d done it – she’d proven that we had at least one relative who was here before our country was even a country and who fought to make it one. I’ve heard about east coasters that are very name-centric and who are all about how they were descended from the Mayflower (don’t ask me how that comes up in casual conversation), but I’m a west coaster. Somehow, finding out how deep my roots go on this continent actually made me feel like less of an American than the newcomers who had to risk life and limb to get here, learn English and actually pass the citizenship exam.

Somehow, I felt like I didn’t have any culture. It’s not like you can really own being the mainstream. We celebrate Thanksgiving – booyah! We eat chocolate chip cookies and hamburgers! And we play volleyball!

Well, thanks to my travels abroad and my boyfriend (who has never celebrated Thanksgiving), I have realized I actually DO have a culture. He constantly points out to me weird things that I do. Now I can just tell him that they are cultural. Things like drinking tap water, going hiking and composting my kitchen scraps. And about 95% of the stuff on the Stuff White People Like Blog (My boyfriend likes about 40% of the things mentioned and perhaps 10% of the list elicited “Why would anyone ever do that?”).

These cultural differences were hit home by my inability to find certain foodstuffs at the supermarket by my house (El Super). It is an extremely Mexican market which is generally great since it has fresh-made tortillas, a huge produce section and outrageously low prices. However, sometimes you just have to go out of your way to get authentic products from the homeland. In my case, that special place is Ralph’s.

Cream of tartar (for making the traditional snickerdoodle cookie)

Perhaps my shopping list kind of borrows heavily from the cuisines of other world cultures, but what can I say? I’m American.

Filed under Getting personal