German and I swung by the Bug Fair at the Natural History Museum last weekend, which was a merry chaos of kids, creepy crawlers and creepy bug enthusiasts. That’s unfair – they weren’t creepy, just really into bugs.To get any feel for the melee, you have to see it. Here are my pics from the event. Speaking of groups you’ve never heard of, these two made an appearance:

S.C.A.B.I.E.S (Southern California Arachnid, Bug, Invertebrate, Entomological Society) – If you weren’t already convinced that the internet has created a place for every taste, this pretty much settles it. SCABIES has 309 registered users. Among discussion board topics:

David & Nesh’s Naughty Burrow
Be afraid. Be very afraid. This is where DavidRS and Nbond1986 let down their hair. 18+!!!!

Foreign Consulate
Going to be visiting Southern California? Let us know so we can arrange to meet and or hunt/hike with you!

DANG! That Stings!
Bite, sting, and other damage reports… where *venom* gets to meet the meat!

SF BATS (San Francisco Bay Area Tarantula Society) – “Northern California’s premier invertebrate society” – You have to click through and check out the enormous tarantula on the Golden Gate Bridge – AWESOME!!

Besides the fringe groups, I was struck by the sheer number of vendors dealing in mounted butterflies. Apparently, only the rare butterflies are still captured by daring adventurers stalking them in the jungle (and these butterflies are usually endangered and traded illegally). There are now huge butterfly farms where the prettiest specimens are snapped up and tossed in the freezer right as they emerge from their cocoons, before they have a chance to damage their lovely wings. There’s quite a market for them.

There were also a number of people raising butterflies native to Southern California, including the official state insect – the California dogface butterfly or dog head (Zerene eurydice). Here’s a video of the Dogface’s lifecycle by a guy we met at the event who is also a sound technician. He gets props for being the first person I’ve seen with a sign that says: “As seen on Youtube.” After all, “As seen on TV” is SO 1990.

The original name of L.A.

I recently picked up a copy of The Founding Documents of Los Angeles: A Bilingual Edition at my local library. Since I don’t think even the most glowing recommendation would send you running to the library, I’ll pull out a few highlights here and save you the trouble.

Many have heard at some point or another that the original name of Los Angeles is actually something crazy long. That is somewhat true, according to a very good, heavily footnoted essay by Theodore Treutlein. He attempts to lay this question to rest once and for all. Unfortunately, if Snopes.com can’t kill email forwards, I don’t think that his essay will singlehandedly kill the mistruths around the original name of the City of Angels. However, he’s convinced me.

According to our dear friend, Theodore, the original name was….(drumroll)….

In some early documents, the authors threw in some other stuff which is how the rumor started that the original name was:

It’s certainly catchy. Those of you who speak Spanish will be asking at this point, “Where the heck is the Porciuncula River?” Well, right where it has always been, running right down the middle of the pueblo. Only now it looks like the final scene from Grease and is known merely as the Los Angeles River. I supposed the beauty of the name goes down in direct proportion to the beauty of the river.

And now here we find ourselves in a place now known best by it’s initials – L-A. I don’t know whether I miss the more grandiose name or if this means LA has actually ascended into an exclusive club. After all, only three U.S. cities are well-known by their initials alone – LA, DC and NYC. Not bad company at all!

Quaking in their flip flops

When my relatives from Oklahoma used to come visit us here in California, they’d always be nervous about earthquakes. I’d always point out that earthquakes are really so rare, whereas they actually have to deal with tornados and whatnot. Remember the movie Twister? How ’bout Wizard of Oz?

I’ll stick with my cozy home on the San Andreas fault, thanks.
Now I am rethinking that. We’ve had two earthquakes down here in the past couple of days. On Sunday night, Los Angeles was hit by a ridiculously long earthquake. S-E-V-E-N-T-E-E-N–S-E-C-O-N-D-S long, which is like, F-O-R-E-V-E-R. It was a 4.7 which means the TV stations pretty much had to knock the bottles off shelves themselves to get any footage. We had another 4.0 today which felt like just one huge jolt, as if a truck crashed into the building. I didn’t even stop my phone conversation.

I guess I should be worried that earthquakes are becoming run-of-the-mill for me. After all, there are states that have remained absolutely still for the past 30 years…Wisconsin. North Dakota. Even dodgy Florida!
I seem to have a predilection for seismically unstable places however. I lived through quite a few terremotos and temblores light in Mexico City while I was there. It’s kind of becoming like the boy who cried wolf. I’ll undoubtably be laughing and continuing to watch TV as the plaster rains down upon me when the actual big one comes.

Years ago, I took a weekend conference on urban planning and assessing the seismic/major natural calamity risk of various places. Our map overlays showed pretty clearly that most of the world’s urban centers are basically located on the Ring of Fire (*not the one to which Johnny Cash referred, let’s hope). Tokyo, LA, San Francisco… all built on some of the world’s shakiest ground. And not likely to move anytime soon.

So let’s hope the man in black isn’t just being prescient when he sings these lines:

The 1997 movie Volcano in which a volcano mysteriously erupts in LA was absolutely horrible, but the real thing might actually be worse. Well, at least I’ve already got the soundtrack to the apocalypse cued up: 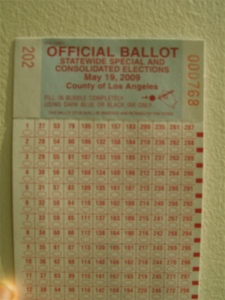 I’ve been a PAV (Permanent Absentee Voter for those of you NOT in the know…losers!) ever since living in Portland, OR where they don’t actually have polling places – everyone is absentee.
I continued voting from Mexico that way as well, with my mom keeping me up on the latest Sonoma Valley happenings. I recently changed my address so that I could vote here in my area and the above ballot arrived in the mail.
My initial thought was something like: “Seriously?”
My ballot looks like some sort of puzzle book for kids where you’re trying to crack the secret code. Unlike my Sonoma County ballot where you actually mark the dot next to your favored candidate’s name, here in LA, differently numbered dots indicate your vote. Mark 54 for “Yes on 1A” and 55 for “No.”
Who in the world thought this was a good idea? And I thought the butterfly ballots were confusing!
I figure I’m not exactly the first person to carp about this so I’m idly googling trying to figure out 1) Who cares? 2) Who complains? and 3) Who is doing anything about it?
The answers seem to be:
1) Not anyone at the County Registrar of Voters
2) Designers who are peeved that no one listens to their sage suggestions, offending them both morally and aesthetically
3) Design for Democracy, Brennan Center for Justice

I particularly liked this impassioned plea by the author of the Brennan study on ballot design:

“The good news is that states and counties can take steps to improve ballots now, well ahead of this year’s general election. We implore them to do so,” he continued.

Aaaaahh…earnestness. That’s so cute. But they don’t care. Wait…

This statement on the study from our very own:

Los Angeles County Clerk Dean Logan says ballot designs and instructions are “the element of the elections process where we have the most opportunity between now and November to try and prevent inadvertent errors that voters might make.”

Mapping the diaspora: The world in my own backyard

Part of my job is going to events to chat with constituents, present certificates of recognition, and basically be out and about. Last Saturday, I covered four events that sort of sum up in a single day the demographics of my new home.
I started out at an elementary school jog-a-thon where I chatted with the primarily Latino parents in a mix of Spanish and English. Then I swung by a Women’s Club event populated largely by elderly white women, went over to West Covina for the Cherry Blossom Festival where I enjoyed a beautiful Japanese tea ceremony. Then I wrapped up the day with some chow mein and fried rice at a ribbon cutting for a business simultaneously opening offices in San Marino and Shanghai.
The area my office covers is about 65% Latino and 20% Asian. The lunch options around my office include sushi and teriyaki bowls, Hawaiian food, Chinese food, pastrami sandwiches, Subway, Mexican food from multiple regions, hamburgers and BBQ. Everyone in my office is bilingual.
I was looking for some statistics on English Learners when I came across this sort of extraordinary list of languages spoken by students in California.

I made an attempt to map the languages, but it was difficult since many of the languages are spoken in various countries – Arabic, for instance. I had to lop off the most widely spoken languages or there was no gradation. The top languages spoken by California students:

*Check out the complete spreadsheet this map is based upon here.

I was blown away by the number of Spanish-speakers, but more than anything, I was fascinated by the obscure languages. Several I had never even heard of like Assyrian, Cebuano or Chamorro. It reminded me of when I came across this abbreviated list of indigenous languages spoken in Mexico maintained by the Mexican government.

Well, I’ve got lots of exploring to do in my new neighborhood – Salvadoran pupusas and Vietnamese pho are up next.